Serviceberry in Spring Gulch: Seven Meditations on Living in an Economy of Gratitude

First Meditation: The Gift of Gift Giving as Witnessed by Serviceberry, and Chokecherry and Hyacinth too!  (Parking Lot)

"You can call them natural resources or ecosystem services, but the Robins and I know them as gifts."
We are gathered here today to witness the manifold gifts offered by creative energies that emerges from beyond our own all-too-human capacities to have made this occur.  In doing so, let us first become mindful of the gift encompassing all others, the gift of receiving and giving gifts.
In Potawatomi, Robin Wall Kimmerer tells us, the serviceberry is called "Bozakmin," whose most important syllable is "min," the root for berry but also the root word for "gift."  At their root and in their leaves, serviceberries offer "bushes spangled with morsels of sweetness in a world that can be bitter."  We cannot help, she suggests, but feel gratitude in such circumstances.  Indeed gratitude is the very currency of the earthly for Kimmerer, involving "much more than a polite 'thank you.' It [Gratitude] is the thread that connects us in a deep relationship, simultaneously physical and spiritual, as our bodies are fed and spirits nourished by the sense of belonging, which is the most vital of foods."  In doing so, the world not only sustains itself through this gift giving but invites us into its abundance.

"The tree is beloved for its fruits, for medicinal use, and for the early froth of flowers that whiten the woodland edges at the first hint of spring. Serviceberry is known as a calendar platen, so faithful I it to seasonal weather patterns. Its bloom is a sign that the ground has thawed and that the shad are running upstream--or at least it was when the rivers were clear and free enough to support their spawning.  The derivation of the name 'Service' from tis relative Sorbus (also in the Rose Family) notwithstanding, the plant does provide myriad goods and services.  Not only to humans but to many other citizens.  It is a preferred browse of Deer and Moose, a vital source of early pollen for newly emerging insect, and host to a suite of butterfly larvae - like Tiger Swallowtails, Viceroys, Admirals, and Hairstreaks - and berry-feasting birds who rely on those calories in breeding season."
To these gifts, Craighead adds: The entire plant is palatable to deer, elk, moose, mountain goats, big horn sheep, rabbits and other rodents.  For this reason, Serviceberry is often the first plant to be eliminated in overgrazed ranges.  Pheasants, grouse, and black bears eat the berries and the buds are a staple winter food of rugged grouse.
So, so much to be thankful for.  The miracle of Serviceberry opens our eyes to how much the world invites our gratitude.

Third Meditation: Living in Reciprocity with Serviceberry and its Kin. (Spring Creek Bridge).

In the thickets running along Spring Creek is found not only Serviceberry but also some of its kin in the rose family, including River Hawthorn, Currants, and Wild Roses.  A more distant kin, Red Osier Dogwood, is also found here in abundance.
From the Salish Plant Society Website, maintained by ethnobotanist Rose Bear Don't Walk, we read that the Salish People "honor each and every plant as they come to us new in the spring and summer months."  Among these, it is noted, is the one named "Staq" in Salish, or Amelancher ainifolia in taxonomists' Latin, or Serviceberry in English.
Let us for this moment then put the emphasis upon honoring all the plants surrounding us here and in particular Serviceberry in this renewing moment of Spring.  In doing so, let us also become mindful of Robin Wall Kimmerer's thought that if our first response to serviceberry is to involve gratitude, then our second should involve reciprocity: to give a gift in return.  Perhaps the very first gift we might offer in to return serviceberry is to honor it, so as to bring it fully into our hearts so that we might share the story of its gifts with our fellow humans.

Fourth Meditation: Why do we succumb to economies of commodity? (Serviceberry Alley at turn off to Spring Gulch)

Robin Wall Kimmerer writes: "To name the world as gift is to feel one's membership in the web of reciprocity. It makes you happy - and it makes you accountable."  But this observation then leads to a troubling question: "Why," she asks, "have we permitted the dominance of economic systems that commoditize everything?  That create scarcity instead of abundance, that promote accumulation rather than sharing?  We've surrendered our values to an economic system that actively harms what we love.  I'm wondering how we fix that.  And I'm not alone."
Have you ever felt alone when confronting the consuming energies of our econonmy, helpless in the rush to take hold of the things of the world so that one can survive?  How does this feel?  Please feel free to share your thoughts not only with one another but with the serviceberries lining this walkway.

The colors of things are also powerful medicines, medicines that in some cases work with one another to form patterns of invitation. Beauty is a medicine! This is what Robin Wall Kimmerer suggests in her chapter in Braiding Sweetgrass regarding how purple and yellow, the colors of asters and goldenrods, interact in reciprocity when the plants are near one another so that "growing together both [might] receive more pollinator visits that they would if there were growing alone."  Before us rises a mountainside of Lupine and Arrowleaf Balsamroot, vibrant purple and yellow blossomings, just as in the case of Asters and Goldenrod, each plant being illuminated by the radiance of the other.  To take our experience of this beauty seriously, Kimmerer suggests, we must move from the question of "What is a lupine?" to "Who are you, Lupine"?, and "Who are you, Arrowleaf Balsamroot?"   Let us pause to reconsider our relationship to these to fellow living kinds and to ask anew how we might better listen for the wisdom these offer us. 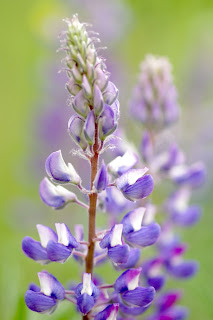 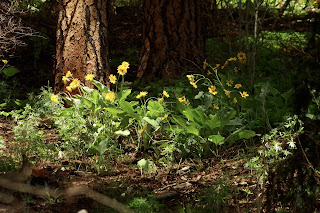 Sixth Meditation: Returning to a Gift Economy (By the Feral Apple Tree)

Several groves of feral apple trees, remnants of former homesteads, inhabit Spring Gulch and the rest of the Rattlesnake watershed.  Like them, this single feral apple tree, lost in a thicket of Currant and Serviceberry and Hawthorn, was likely once solely dedicated to the feeding of human hunger but now has been abandoned to the hungers of all comers.  And like Serviceberry, Currant and Hawthorn, Apple is a member of the rose family.  This single tree before us blossoms and continues to offer itself no longer as commodity for an economy of scarcity but as gift in an economy of abundance.  Robin Wall Kimmerer writes: ''In a gift economy, wealth is understood as having enough to share, and the practice for dealing with abundance is to give it away....The currency in a gift economy is relationship...A gift economy furthers the community bonds that enhance mutual well-being; the economic unit is 'we' rather than 'I,' as all flourishing is mutual."
Let us reflect upon the transformation of this apple tree, of its reintegration into an ecosystem in which its gifts have become fully open to all comers.  This transformation of its generosity inspires us in a manner that keeping the apple merely for our own hungers would not.  This leads to a question for our reflection:  How might our hungers live in reciprocity with the hungers of others?

In his book Sacred Economics, Charles Eisenstein observes: "In nature, headlong growth and all-out competition are features of immature ecosystems, followed by complex interdependency, symbiosis, cooperation, and the cycling of resources." Meditating upon this thought, Kimmerer ends her essay with this passage:

"Continued fealty to economies based on competition for manufactured scarcity, rather than competition for manufactured scarcity, rather than cooperation around natural abundance, is now causing us to face the danger of producing real scarcity, evident in growing shortages of food and clean water, breathable air, and fertile soil. Climate change is a product of this extractive economy and is forcing us to confront the inevitable outcome of our consumptive lifestyle: genuine scarcity for which the market has no remedy.  Indigenous story traditions are full of these cautionary teachings.  When the gift is dishonored, the outcome is always material as well as spiritual. Disrespect the water and the springs dry up...To replenish the possibility of mutual flourishing, for birds and berries and people, we need an economy that shares the gifts of the Earth, following the lead of our oldest teachers, the plants."

And so we end our guided meditations, at the site of an old homestead that has been returned to the land so that both humans and serviceberries, along with the many other living kinds inhabiting the Rattlesnake Watershed, might thrive.  We stand here today with this question: "Where is the place in our home places for the home places of others?  To answer this questions, Kimmerer invites us into a transformed and transformative relationship with all other living kinds, and all the energies and elements with whom we share the earth.  Please use your walk back to the parking lot as the occasion for personal meditation and animated interchange with others on this important question.
- Meditations inspired by Robin Wall Kimmerer's
"The Serviceberry: An Economy of Abundance"
Posted by Dr. James Hatley at 1:21 PM No comments: