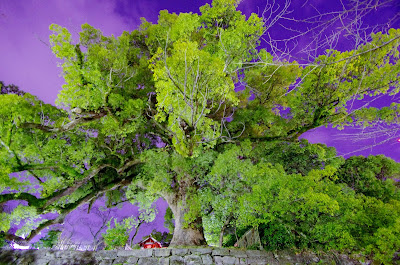 Sometimes the image does all the talking.  And sometimes the tree in the image is doing the talking in all the talking.  This aged camphor tree, a Shinto shrine in the very heart of Wakayama, is a must visit spot each time I return to Japan with a new group of students to hike the Kumano Kodo Pilgrimage Route.  A sporadic stream of people, some homeless, some well-dressed, some young and some old, visit this site throughout the day and into the night.  Humans gather with crows and ferns and feral cats and all other manner of living creature to find a moment of solitude, to offer a word of thankfulness, to seek consolation.  Or simply to be in the presence of the tree's ministry.

I have photographed a series of images of this tree, mostly at night.  Interestingly, in this particular image the outpouring of light from the city illuminates the sky turning it into a spectral backdrop, even as the many lamps lining the paths of the park in which the tree is found provide foreground and accent lights.  The tree, it turns out, is posing in a vast photographic studio constituted by a flood of urban illumination.

Urban light pollution is often and rightfully mourned as one of a host of factors cutting off us denizens of the contemporary techno-imperium from the living stuff of creation.  Or at least cutting us off from how the world is shared with creatures far more accustomed to the dark than we are.  In wiping away darkness from the night, have we not lost contact with our own dark natures?  Which is to say those aspects of the world that befuddle our senses, or at least our vision.  The world is not always ours to grasp at a distance, the darkness teaches.  And when distances do appear in the unobstructed darkness of the night, they are the magnificent and harrowing heights of the stars spreading out and dancing in a great circle over the sleeping earth.  For us humans to look into the night sky that is full of the night calls for humility and daring. Losing the night diminishes us.

Yet, this image of a camphor tree, I must confess, is a striking one.  And I hunger to return night after night to see what new revelations it might have in store.  The urban night lights afford nature a shining forth that is not to be found otherwise for human capacities.  What to do then with this blasphemy that is also a blessing?
Posted by Dr. James Hatley at 2:38 AM