Once you know where and when to look, finding a nest of hatching mantises is not so difficult as one might think. Mid morning seems to be the best time.  The mantises wriggle out rear-first from the oocenta, their egg case, one by one, wet and folded in on themselves.  Just like moths or butterflies emerging from a cocoon, they need to stretch out and dry.  Then, if they don't simply drop away from the writhing mass of their fellow hatchlings hanging in mid air, they clamber back up by the thread by which that whole cluster is hanging and find immediately nearby the highest perch available.  And then, when their oocenta-mates begin to dispute that perch, they climb down a stem and scatter into the garden.  Such an event!

Moments like this one stop me cold.  One cannot simply note them and then move on.  They demand meditation, or at the very least, rumination, the turning over in the mind of the various ways in which, for instance, the birth of a clutch of mantises is no small thing.  Or perhaps, better, how the small thing that is that birth is all the same remarkable, fully endowed with the capacity to invite one's awe.  The everyday world of earthly things, it turns out, is wild, dense with meaning.

Not a single mantis crawls about the face of the earth that did not emerge from an oocenta such as those dotting my garden.  All too often, one takes for granted that the living kinds are simply going to show up, that the earthly, after a long winter's nap, is automatically set to repopulate itself.  But this expectation ignores the long waiting in the cold, the sudden registering of warmth, the developing of an egg until its occupant is ready to squirm tail first into the light of a spring morning.

I have been working through with my students this semester a series of readings raising the prospect for a contemplative ecology.  Sensei John Dado Loori in a small set of essays titled "Teachings of the Earth" speaks of how the river verifies the river, of how the earthly communicates itself precisely as itself.  We need to get out of the way, Loori recommends, so that the suchness of earthly things is rendered palpable in our thinking, so that we might become intimate with them.

The wild is not to be found in the bizarre or the exotic, the untamed or untrammeled.  Rather the wild is precisely that which in its very ordinariness verifies itself as such.  If there were ever a moment that begged for a contemplative response in an ecological vein, certainly the birthing of mantises would suffice.   As ordinary as the unfolding of a leaf or the rising of the sun, the birthing of a mantis reassures us of our own place upon the earth.  If, that is, we were simply to attend to it with an open mind... 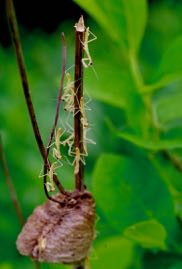