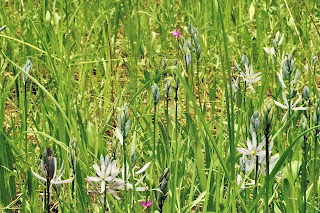 "Ain't goin' there," as one campfire song's refrain playfully puts it.  I too am not so confident of a positive outcome, and not just because I haven't been behaving well.  After all, we find ourselves increasingly in a world for which the reality of heaven, at least understood as afterlife, is radically in question, if not fully irrelevant. Indeed, religion, which provides a home for all sorts of notions of heaven, is itself in danger, so some say, of going extinct.
In these circumstances, my son and I recently had a conversation about heaven as we ambled up a wooded gorge surrounded by a surfeit of blooms - blue camas, shooting stars, arnica, the fresh beginnings of lupine, the tattered remnants of glacier lilies dotting the earth.  All these spring ephemerals, as they are called - shooting up overnight and disappearing within a week or two - certainly emphasize the transitory nature of things here on earth.  And yet precisely in these environs, we humans are struck by the glory of it all.  The temporary is caught up in a light that suggests something more, something, dare we say it, perfect.  We think at such moments: "Nothing to be added, just this." The conversation on that day in the main consisted of musings and ruminations.  One thought:  Heaven could be a very difficult place. We likely would be stuck with a whole host of personas we would prefer not to have had the opportunity ever to have encountered again.  What if heaven involves something along the lines of the inverse of Sartre's famous dictum - that hell is other people? Particularly those other people!  This point in turn reminded me of something shared by an Oglala thinker who once was invited to the Salisbury University campus: In the spirit world, he shared, there are no secrets.  Everyone knows what everyone else did and what they are thinking about it now.  Where's the fun in that?
But fun is perhaps precisely what heaven does not involve.  Christian theologians speak of heaven as a basking in the presence of the Most High, the summum bonum, the highest good, of all creation. But need that involve a perpetually extended, really great day at one's local watering hole with a carefully chosen repertoire of family and friends?  Indeed, would the summum bonum even allow one merely to bask in it, as if one were sun-bathing in the Good? 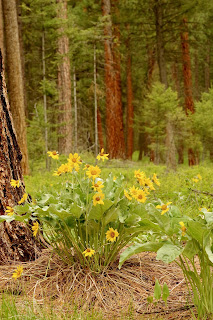 If heaven is anything at all, it is arguably a place or state where the glory implicit in all things is thoroughly unleashed. as one finds one's voice resounding in an emphatic Yes to creation.  What this might imply is only darkly sensed here and now, I think.  Certainly, praise is involved, praise beyond any sense of what we might currently imagine, praise that is certainly not fulfilled, as Mark Twain once, in a less than charitable mood, characterized it: as singing interminable hymns in a stuffy Sunday worship service without end.  Rather. heaven might be more like walking up a mountain slope on a gaudy spring day asking whether heaven means anything at all.
I think we decided, my son and I, that we are better off in our skeptical times with at least the thought of heaven, as long as we remember not to take liberties with it, to render its meaning facile by selling it and ourselves short. Perhaps Dylan Thomas had something like that in mind when he wrote:
Dark is a way, and light is a place,
Heaven that never was
Nor will be ever is always true,
And, in that brambled void,
As plenty as the blackberries in the wood
The dead sing for His joy.
Our day was too early in the season for blackberries, but still the thought sticks.  The dead surely were there, and we, the currently living, at least for now, as well.  And I can only hope that my son and I are and will be in some fashion singing in those woods long beyond the brief moment we took a walk there.  How that might be, I cannot know.  It lies in heaven itself to say. 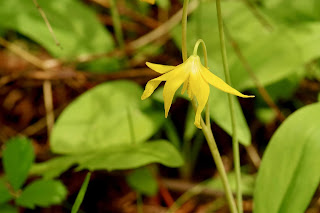