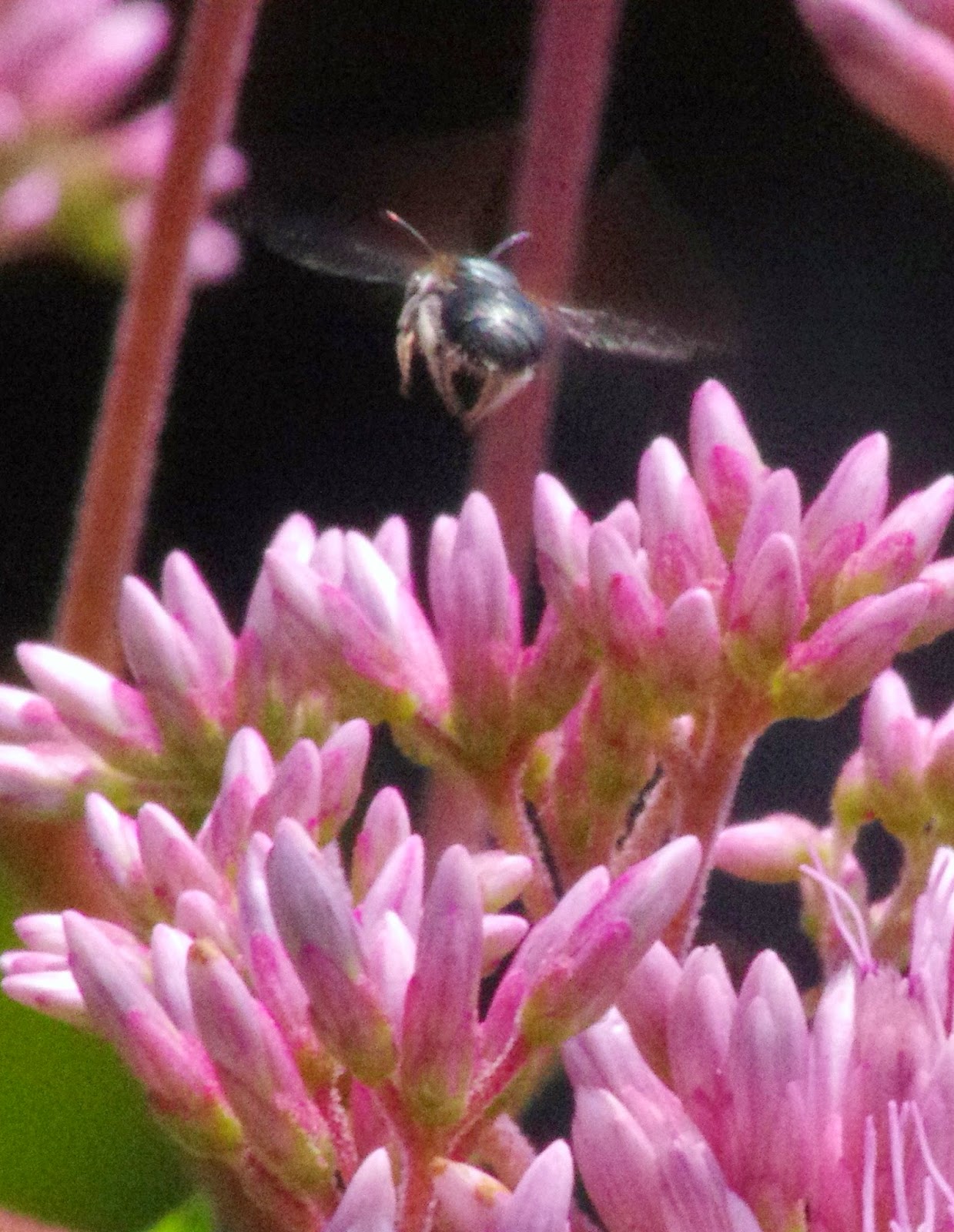 The mid-summer sun has been pouring down nonstop on the meadow garden, a plot in my yard with a variety of native plants and some not so native ones: false indigo, phlox, Joe-Pye weed (not really a weed), meadow sweet, cone-flower, bee balm, butterfly weed (really a milkweed, which is also not a weed, except for some), hyssop, yarrow, cup rosinweed (also not a weed, except evidently in Connecticut), rudbeckia maxima (a black-eyed Susan on steroids) several varieties of bunch grasses, nettles, meadow rue, trumpet flower and the like.  Basically green things that like to congregate in crowds of green things.

Today the sun is hot, and the honey is coming. Non-stop.  The pollinators arrive in droves; a feeding frenzy ensues..

As the meadow's perennials have rooted in over the last decade and found their respective places among their fellows (with varying degrees of guidance on my part), I've begun educating myself about the many types of pollinators coursing through this patch.  Little insights accumulate.  For instance, at first one's eye, uneducated, is caught by the obvious: big burly bumble bees dashing here and there to alight on the purple crowns of bee balm and cone-flower; or multicolored swallowtail butterflies clustering on a leafy wall of scarlet runner making its home in the nearby vegetable patch.  Polaroid moments ensue.

But then one looks again.  And again.  And notices smaller bees and wasps, flies as well, some small and quick enough that the only hint they are there is the glinting of their wings as they dive into the perianths of blossoms no larger than grains of rice.  Sometimes even smaller than a grain of rice.  It's not for nothing that botanists and entymologists come armed with a loupe when entering creation.

And so the question of scale arises. Blaise Pascale, both mathematician and philosopher, suggests that humans are poised between two scalar realities--that of the increasingly large and the increasingly small. While Pascale was intent on thinking through how either direction leads to the infinite (a mathematical concept and metaphysical category with which he was especially conversant), for the time being and the garden's sake one could simply think of  the scalar magnitudes close to the middle ground characteristic of our all too human gaze upon the face of the earth.   Plenty of wonder can already be found in this neighborhood.

And that thought brings me to the image above, taken with a Pentax DSLR 5000 as I stood in the garden earlier today surrounded by buzzing pollinators.  The picture is of a wasp, yet to be identified, in mid flight after having gathered nectar from masses of miniscule pink blossoms clotted on an umbel of Joe-Pye weed. Up this close the intricate structure of the umbel finds renewed definition in the foreground, even as one's eyes are directed slightly beyond to the hind end of that wasp, its legs hanging freely and its wings shimmering with movement.  I am particularly fond of the two antennae curved above its body, indicating where the eating and seeing end of the wasp is located.  It is as if I have entered another dimension of creaturely existence, as if the gaze of those compound eyes located under the antennae have been delivered to me. Looking about the world from the viewpoint of a wasp, I find, is exhilarating. revelatory, something both very old and very new under the sun.

Of course, I did not register any of this at the moment the scene occurred.  Only the camera through whose viewfinder I was gazing had the quickness of eye and the exactitude of memory to bring this particular world to light.  What I saw was a wasp sprawling across an umbel, crawling busily from perianth to perianth, ravishing each blossom for its nectar before moving on to the next.  And then in a blur, the wasp disappeared. When this occurred, it was only happenstance, the click of the shutter repeating itself in fast mode, that found an insect in flight.  So as natural as this scene might appear, a tool was involved in bringing it to light, a tool that helps extend the scale in which my own limited and all-too-human eyes can operate. For in this case the very quick and the fairly small were at issue, neither visited with ease by the unaided perception of homo-sapiens.

All of this brings me to two thoughts.  The first involves how the image invites its viewer to enter concretely this fetching, even magical scene.  Indeed, as I gaze at the photograph, moments from animated films, both recent and old, come to mind, in which a winged insect powers through the intricate and miniaturized world of a meadow, bringing our all-too-humans eyes along for the ride.  The scene is, I realize, culturally familiar, even beloved, copyrighted repeatedly by Disney and Pixar.  But the scene is also archetypal.  For  reaching back deep into into our history, variants are found in folk tales, as fairies, elfin creatures the right size for riding on wasps and living on the nectar of roses and lilies, are revealed to us in story if not in fact.

These old tales offer, I suspect, wisdom in their very genre.  For humans cannot move down the chain of magnitudes in order to inhabit other levels of space and time without our existence becoming strange and stranger.  A human that effortlessly rides a bee is not one whose perceptions would translate easily into my own. Part of the axis of our humanity, an orientation that keeps us in check and checked in, is revealed to be the very size and speed at and with which we exist bodily.  We can visit the scene above briefly in our imaginations and fly with the bees; but remaining there would cost us much.

The second thought is more prosaic.  It has to do with the manner in which scale bedevils all questions ecological.  How does one measure the diverse populations of species comprising an ecosystem, for instance?  Does one stop with every footstep to take an inventory?  But if so, what particular line of inquiry should these footsteps take through the ecosystem to be measured? And how far apart are the multiple pathways to be set?  Should they be arranged in a grid?  And how small or large should the mesh of that grid be? Or should the lines of inquiry follow other sorts of contours suggested by variations in topography?  And again, how small or large should the mesh be?  And even as one stops at each place where the ecosystem is to be catalogued and numbered, at what scale of size does one leave off?  Do quarks count as much molecules?  Do molecules in stones count in the same way as they do in cells?  Do cells matter as much as organisms in which they are located?  And should the stars overhead be included automatically in the inventory as well? What of all the others creatures just passing through an ecosystem on their own particular lines of inquiry?  Not to mention the differences that occur, if one's line of inquiry is performed on any given day in a particular season, as opposed to all the other days and seasons. It turns out the very diversity of scales, whether temporal or spatial, through which an ecosystem can be approached is dizzying.  Inevitably, we must decide where to draw a line and keep to it.  In doing so, we also admit implicitly that whatever we know of the living world is always necessarily a fragment and so distortion of it.  In the intricacy and diversity of its scales and their interactions, a single ecosystem transcends all hope of fully perceiving, let alone fully knowing it.

This brings me, in conclusion, to a recent email from my colleague Michael Folkoff, a physical geographer who thinks a lot about the soil and topography.  His complaint: the criterion by which topographers determine the minimum size that must be reached for a "small water body" (otherwise known as a "pond") to be recognized and counted as one has been set fairly arbitrarily.  Since topographical data is stored digitally and mapped out at a scale of 1:24,000, the USGS has decided a small water body must be at least the same size proportionally on the face of the earth as the symbol for a small water body is on a topographical map. However much space the symbol takes up at a 1:24,0000 scale becomes the deciding factor on whether a pond exists or not in the eyes of the USGS.

To decide which bodies of water are or are not ponds is an unenviable task, fraught with the complexity of competing scales noted above.  Who can blame the USGS for cutting the Gordian knot in such an efficient manner?  Yet, as Folkoff notes, "hundreds of ponds in Wicomico County alone are excluded from SWB enumeration by this standard."

How small does a body of water need to be before it ceases to be such?  Droplets on leaves, for instance, are hardly ponds and not even puddles.  They're droplets. Which leads to yet another question: How many categories of the gatherings of still waters are needed to precisely mirror the reality of an ecosystem?  How many ponds can dance on the head of a pin on a topographical map?  As a philosopher this gets me thinking: Why not construct a scalar ontology, a theory of being that does not begin by enumerating concrete or even metaphysical entities or the relations between entities but with the diversity of scales by which entities can appear and be approached in the first place?  Size does matter.  In all sorts of ways.