All in the Family: In Praise of Goldenrod and its Pollinators.

The season has arrived in which to praise goldenrod and the living kinds who love it.  While two species of goldenrod are currently making their home in the garden, by far the one preferred by both human and arthropod is the commonly occurring Solidago canadensis.  The progenitors of this particular patch were harvested unceremoniously from a roadside ditch and had their roots folded into the damp soil at the edge of small bog put together from scratch in the back yard.  The transplants immediately thrived and now have reseeded themselves across the garden. Goldenrod doesn't take a lot of caring for to flourish and is among the first species to colonize a newly-disturbed area.  When in flower, according to the Omaha People, goldenrod presages the ripening of the corn crop.  Here in the back yard, rows of erect yellow blossoms announce a free for all for digger and ichneumon wasps, organ pipe mud daubers, soldier bugs and locust tree borers.  In the heat of the day, when each plant is busy photosynthesizing sugar, all of the above and more crowd in.  Later in the evening, when the pickings are leaner and more nimble fliers have departed, the slower-moving carpenters bees stick around to claim, in a quieter moment, their own full share of the nectar. Some of these stay right through the night, becoming dormant and then reawakening in the morning to resume their feeding in the early dew.
For several reasons, I have been taking photographs of the various tribes of living beings showing up on the blossoms over the last week.   Perhaps the most visceral motivation for doing so involves a desire to take snapshots of one's relatives.  The more one spends time hanging out in the garden with these creatures, the more they seem like one's neighbors and then one's family.  And why not? We are, after all, all sharing our respective places at the table in the very same garden under the very same sun.  And the manner in which each species negotiates its participation in the great feast is worthy of note.  With so many airborne diners, one comes to appreciate the many styles of arrival and departure - from acrobatic to bumbling, from beeline to roundabout, from nervous to assured.  And while most defer from mating while dining, locust borers find a way to do both, the female clawing her way from flower to flower, drinking in nectar, while the male is perched on her, preoccupied with another matter altogether.   If this is family, then it's a crazed one.  And snapshots are certainly required, if only to remind one of the family resemblances, in so far as they can be ascertained.

But the reason that took me, camera in hand, out into the garden in the first place was simply the prosaic task of identifying its living kinds. Before one can welcome someone into the family, that someone needs a name. The photographs were a mnemonic tool, a way of keeping fresh, if not in mind then at least in image, the shape, color and sundry characteristics of a particular creature, until a guide book could be supplied to correlate its picture of a species with mine of a specimen. Needless to say, this phase of my relationship with my subjects involved getting the proverbial God's- eye view of them, both from above and from the side, with all the relevant parts clearly displayed.  In metaphor if not in reality I was intent on pinning down each new species, as if it were already strategically positioned in a specimen box stuffed with yellow flower heads instead of the usual white cotton.. I wanted a picture just like the field guides supply, and getting that exact image held all the excitement of the hunt, as I stalked each photographic prey in turn until they were caught, proverbially frozen in my weapon of choice, the camera's omnivorous eye. Only later did I begin to notice how the camera possessed the uncanny power to open up my senses to an arthropod's engagement in her or his environs by bringing me face to face and so eye to eye with an individual actively working her or his way through endless, yellow strings of goldenrod flower heads. Astonishingly, the gaze of various arthropods I was so busily capturing in image would sometimes follow my movements, fixing on my camera's stare as it moved to the left or right, adjusting their bodies to be out of my line of sight.  Of course, at some level I know insects are keenly aware of my all-too-human presence, but how this presence is palpably registered in their gaze as they react to my approach never ceases to amaze me.  I am reminded that they, like me, negotiate the world with their senses and their bodies.  Like me, they squat down to get underneath a low-hanging object in their path. Like me, they turn their heads to catch a flick of motion nearby.  And like me, they wish to be left unimpeded as they pursue their own agendas among the flowers of late summer.
As Leopold notes in his 1947 essay "Conservation Aesthetic," Americans, when they have turned to the living world for recreation, for the most part have gone out in search of one sort of trophy or another, whether it be a mounted elk head, a colorful trout for one's table, seeds for one's indigenous garden, a stone for one's pocket or merely a photograph for one's facebook page. Leopold allows that the photographic image is perhaps the least invasive of these practices (at least in the places where they are taken, as opposed to those unhappy sites, most often located in third world environs, which supply the raw materials and industrial production for one's camera and its image-storing paraphernalia). But Leopold also argues that the beauty of a photograph is nothing next to an intimate knowledge of the living kinds and their cycles of life, of the numerous processes and relationships constituting the flow of energy that is land.  As a result, in Leopold's words, "to promote perception is the only truly creative part of recreational engineering."  I suspect this also holds true of the "engineering" that goes into the planting of one's garden. When goldenrod flowers, one's knowing who shows up and why in all its breadth and complexity is necessary to becoming a worthy audience for the land's beauty, for what Australian Aboriginal peoples name "country" in English. Like music, country is a flow of energy, various chords and motifs finding their moment under the sun before either dissipating or moving on, the plethora of living kinds arising and decaying in diverse tempos and keys.  The life cycle bringing the organ pipe mud dauber to these flower heads is not the same as that of an ailanthus webworm moth. One stings and the other has dusty but colorful wings.  One winters over in the area and cobbles together ornate nests resembling organ pipes for its young, watched over by both parents. Spiders are supplied in abundance for their larvae to eat. The other is a subtropical insect that has recently taken to migrating north every summer to lay eggs on the leaves of the increasingly widespread Tree of Heaven (Ailanthus altissima) introduced to our continent from China.  In this case, the larvae fend for themselves, feeding and then spinning their silky cocoons in the folds of ailantus leaves, while their parents are busy with mating and imbibing on the nectar of a host of flowers nearby.

And so these two living kinds, among a host of others, find their way to an ordinary patch of goldenrod that happens to be in my garden.  And in their comings and goings is overheard a few small phrases of that vast music, those intricate rhythms and motifs, that is county. I am impatient to hear more. 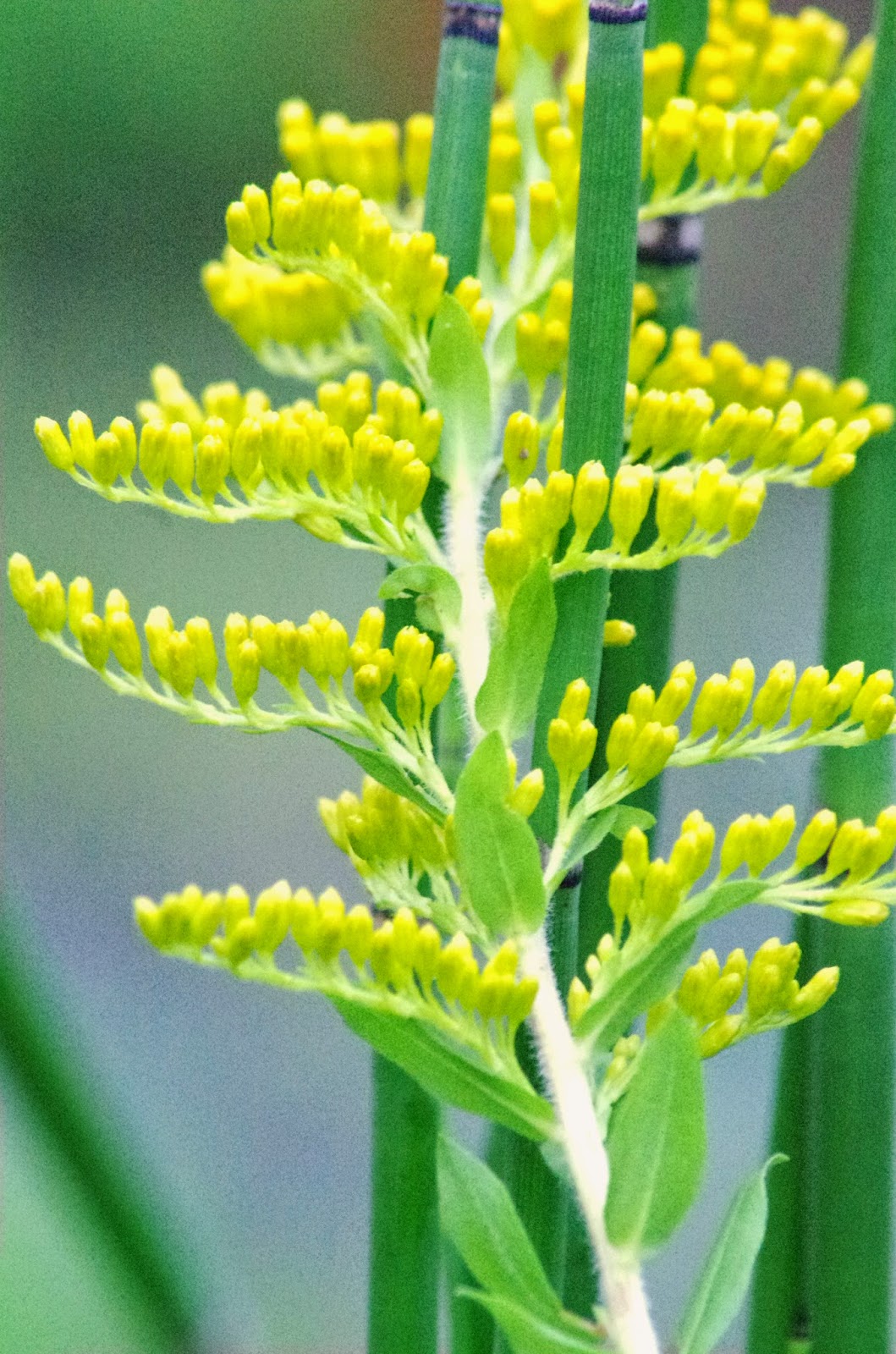