Winter evenings set in early, so Tom Horton, spokesperson for all things Chesapeake, makes sure we reach the headwaters of the Chicamacomico River before the buglers begin to arrive.  After leaving the vans parked a discrete distance from our final destination, Tom and his students walk down a gravel road to the edge of a network of marshes interlaced with open water, an old mill pond now mostly filled in and located to one side of Highway 50.  In the distance, a steady stream of cars obliviously pass by, their headlamps flickering through the trees surrounding our site. In the chilling air, we quickly settle down on blankets, or lean against tree trunks, staring out into the deepening evening with notebook and pen in hand, ready to write down our thoughts, should any arrive, at a moment's notice.  But the real wait is for the Tundra Swans themselves.

Our vigilance is soon rewarded.  Each flight arrives, a few birds at a time, fast-moving, ghostly blurs nearly swallowed up in the growing darkness.  Even in the dim light, the grace and strength of their movement is undeniable.  As each successive flight plows into the Chicamacomico's waters, it is enthusiastically greeted by a growing cacophony of fellow travelers.  "A four foot windpipe can make a lot of noise," Horton notes later.  At the time, I wonder at how it might be to be a swan in the midst of swans, to be settling into cold waters for a night's sleep while bugling out my lungs, my feathered skull filled with the din of voices from kith and kin.  I ask Tom if the commotion goes on for very long.  "Off and on all night," is his reply.  "They might quiet down a bit before dawn but mostly you're in for a noisy sleep if your tent is pitched nearby."

Tom's love for these great birds is infectious.  For the previous two hours he has been leading us literally on a wild swan chase, as the vans sped down backroads in the fading afternoon light to locate where the birds have been feeding for the day.  At first we have no luck.  The site Tom scouted the day before, fields that were planted with watermelon during the long, humid summers typical of the Eastern Shore of Maryland, are now deserted.  Finally we turn down Ravenswood off of Middletown Branch Road to find a good number of swans out in an expanse of stubble.  The birds are strung out along an elevated irrigation pipeline, clustering into familial pods of mating adults accompanied by their maturing offspring.  "If you listen," Tom points out, "you can hear the young ones making a sound that's not yet a bugle. More like a 'chirrup.' They're still learning to sound like a swan."  The students, following Tom's lead, half walk and half wade across a wet field to the edge of a wide drainage ditch.  On the other side a few hundred feet away the swans perk up, a sea of heads pivoting in unison to gaze in our direction and suss out what's afoot.  A good number take to the air and then settle down again a bit farther out.  The rest remain on the ground, not yet convinced we are a force to be reckoned with.
As the students watch and listen, Tom shares Tundra Swan lore.  These birds, he explains, have been arriving from the arctic reaches of Alaska and Canada to winter in the Chesapeake for nigh on 10,000 years, since the end of the last ice age.  Before that it's anyone's guess exactly where summer and winter ranges were located.  But now the birds before us have flown across a continent, their newest generation in tow, to be here.  Before the last hundred years or so, the swan's winter range was focused on the bay itself, where an abundance of grasses - redhead, widgeon, and sage pondweed, among others - provided rich opportunities for feeding.  But increasingly these sources are disappearing from the waters of the Chesapeake, as the bay succumbs to depredation by humans and, ironically. also by the Mute Swan, a European import and cousin of the Tundra Swan.  Nevertheless, Tundra Swans are resourceful omnivores, so they have switched to handy food sources nearby in the plowed fields bordering on the bay and its network of marshes.  Walking out into the stubble of this particular field, one sees everywhere discarded cobs, stripped of corn and left by the combines to rot back into the soil.   The harvest, it turns out, misses enough kernels to feed a host of swans.  One has to admire an agricultural process that keeps a fellow living kind well fed, even as it nourishes us humans and our livestock too.


But Tom cautions against being too satisfied with this state of affairs.  In an era of mass species extinction, when the populations of a wide range of living kinds are plummeting across the face of the earth, the survival of the Tundra Swan is not at all assured.  Tom notes that the fate of this swan is tied up even more with the fate of the arctic tundra than it is with its feeding grounds in the Chesapeake.  As the former undergoes climate change, the permafrost is melting and with this the marshy pools of water stretching across the reaches of the arctic north, crucial to the swans' thriving, will diminish, if not out and out disappear. By 2080 the Audubon Society estimates 61% of the northern range of the Tundra Swan, which is the place where they mate, bear their young and regain body mass lost during the hard travel and less fruitful feeding of the winter months, is going to be gone. The tundra will have ceased to be tundra, at least as we have heretofore understood this term to mean something.

Perhaps the most crucial bit of information Tom offers about the swans is that there are, in the entire world, only 140,000 of them.  That number is not at all a lot of one kind of a living kind.  Just in the United States there are around 180 towns and cities with more human beings, big boisterous primates, than there are Tundra Swans, feathered and aloft, on the entire planet.  Joliet, Illinois or Mesquite Texas alone has as many people as there are Tundra Swans altogether.  Even if we see these great and graceful birds in noisy congregations of hundreds and even thousands, it's important to keep in mind that each mating pair needs a minimum of two square miles of fruitful tundra if they are going to successfully produce offspring and then raise them.  The adults put in a lot of work doing so, and if their efforts over the long haul prove unsuccessful, their kind disappears.  We humans need to keep in mind that the fauna of a more-than-human living world are not merely mindless automatons effortlessly reproducing themselves down through the ages.  Mom and dad, at least in the case of swans and cranes, of robins and nuthatches, of eagles and osprey, as well as many other similar living kinds, have to show up and put in significant time.  And this effort on the part of individual birds and other fauna to sustain their own living kind calls for our respect.

Thom Van Dooren, in his brilliant study of endangered birds titled Flight Ways: Life and Loss at the Edge of Extinction, reminds his reader that the disappearance of a living kind from the face of the earth does not occur in a single moment with the cutting of a single thread, but rather is the outcome of a massive unraveling over generations of a particular species' entanglement with its habitat and a host of other living kinds   In the last century or so, a lot of unraveling has been occurring in the Chesapeake region, but the swans have been busy re-entangling themselves in the land and waterscapes of their winter home.  If bay grasses disappear, the swans possess the genius to reengineer their residency, to seek out kernels of corn and fallen soy beans amidst the stubble. And they are not so shy that they can't spend the long winter nights on open waters in the vicinity of highways busy with traffic.  The question Tom and his students, as well as the writer of this blog, are left with, is whether the swans possess enough genius to resist our massive altering of both their summer and winter habitats, or whether we humans might even find a way to temper our activities and make more room on the planet for a lot more of more-than-human living kinds.  A world without tundra swans would be a poorer world indeed. 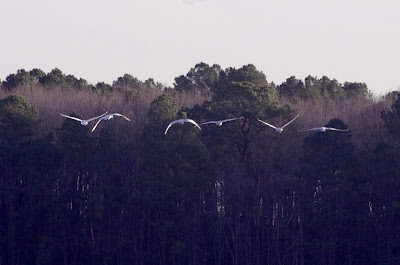