Springs are magic, and we humans can't keep away from them.  If one is nearby, we go and look, and, if we are just a bit foolhardy, we even go and drink.  For several years I have been dreaming of a spring on the headwaters of the Choptank that is likely without a name on any map but is called Rosemary's Spring by those who know it up close and personal.  Recently I had the chance to visit it again, to spend time in its company, and to take photographs of it in the early light of the day.

Names, of course, matter.  The Chickasaw poet Linda Hogan reminds her readers that determining the appropriate name for a living kind or earthly element is a crucial part of our human vocation.  We need, she argues, to be very careful about how we name things and how we use those names once they have been found.  In English, for instance, we have come to name our home the Earth.  That's a pretty important name and, as names go, this one has its charms.   But it also gives the impression that our planet's surface is mainly composed of soil and stone.  It's all about the land.  But between puddles and bogs and springs and streams and ponds and lakes and seas and oceans, not to mention the innumerable aquifers underlying even deserts, we could just as well have named our planet the Waters.  Indeed our bodies are more water than anything else, a feature we share with most earthly living kinds. We humans then are precisely the proverbial fish out of water, except that we've also learned the trick of bringing the waters along with us in our only semi-solid flesh.

Rosemary's Spring and the marshy bottom land it feeds into is a fiesta of salamanders and frogs and toads, of sphagnum moss and skunk cabbage, of spring beauties and unpleasant nettles.  The poet Catherine Carter, who grew up with the spring, has written a poem about it that I cannot get off my mind. 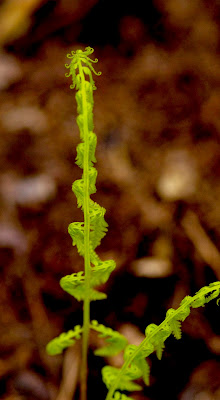 By this spring you cannot stand
to drink like a man.  If you would drink,
crouch on your muddy knees,
four-legged, or lie
flat on the ground braced on wet hands
in the swale. Set your lips to clear
water, but shallow, not even
an inch.  Move your dry
tongue to swallow, and taste oak leaves
and darkness.  The spring
is a puddle that seeps
from the ground; dip it up
and you get mud.  You must
be an animal here,
prostrate yourself.  This spring will bear
no hand, no cup.

I love this poem because it insists that one should not just stand there and take in what one sees.  Instead one is to get off one's own hind limbs and ether crouch or prostrate one's body upon the earth.   The activity involves a lowering of one's regard, a bending down of one's skeletal frame, a nearing of one's lips to the face, literally the surface of an earthly element.  In this act, one is cautioned against becoming so consumed with the swollen tongue, its perpetual obsession for quenching its thirst, that the waters become muddied, and one's drinking is spoiled.

Simply put, Carter's poem is liturgical.  It asks its reader to engage in an action that is solemnly heedful of another.  In doing so one is reminded that drinking water from a spring is a form of prayer.

The specificity of Carter's liturgy is also instructive.  Other waters call for other rubrics.  For instance, in Linda Hogan's essay, "What Holds the Water, What Holds the Light," the dappling of desert sandstone with ephemeral pools of water after a heavy rain is celebrated.  "Along the way," she writes, "my friend and I stopped at a cluster of large boulders to drink fresh rain collected in a hollow bowl that had been worn into stone over slow centuries.  Bending over the stone, smelling earth up close, we drank sky off the surface of water."  Here the genius of the waters of a particular country, of a certain place under the sun, to shape one's all-too-human doings is as filled with light as the seep of water in Carter's poem is troubled by darkness.  The heteroglossia of water, tis many registers of instruction, call for liturgical improvisation and renewed interventions.

Intimations of the biblical story of creation suffuse Carter's poem, although with a difference: one is called upon here to hover over the shallows, instead of the depths, as in the case of the Most High, in order to confront an elemental darkness.  A muddied one, to be precise.  The depths, tehom in Hebrew, of the account in Genesis, are offered a surprising counterpoint here. The shallows, it turns out, are demanding in their own way.  Another surprise is that the poem brings the upright human down to the level of the crouching animal in order that the former might be instructed in humility in regard to its creatureliness.  One is called then to the poverty of a drinking that bears neither human hand nor any cup fashioned by a human hand.  Human preeminence is questioned, as the drinker is deprived of her or his usual props.  But a grace remains.  Darkness is permeated with the taste of oak leaves.  That is a darkness one might be able to bear.  That is the gift of Rosemary's Spring. 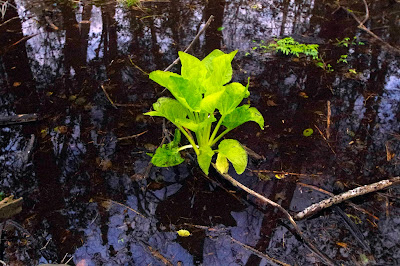