Dreaming the Waters: Regenerative Ecology on the Banks of the Choptank

Nick and Margaret Carter have dreamt of many things under the sun in the fifty years since they settled along the upper reaches of the Choptank River.  But arguably at the bottom of those dreams, if there is ever a bottom to a dream, are the very waters of the river itself.   They are, it turns out, worthy of the devotion of entire lives.  Nick and Margaret have offered theirs in an ambitious project of regenerating  a forest dominated by native species on farmland that had been plowed under early on in colonial settlement and planted in corn and other monocultural crops for centuries.  Regenerating a forest inevitably requires regenerating the waters by which it grows, although Nick Carter might see this in its inverse relationship as well.  For him, the project is as much about restoring good water to the Choptank as it is about restoring ecosystem diversity to the watershed.

Nick would be quick to note that one's notion of a river's waters needs to be expansive.  The very land on which the couple lives, for example, is underlain by an aquifer, the Columbia, whose slow-moving lateral drift, inching along underneath one's feet, is as much a part of the Choptank's flow as the waters explicitly meandering between its banks.  The rain then that falls on the Carters' land, percolating in the soil and infiltrating into that aquifer is also part of the river's flow, indeed so are the weather fronts that have brought precipitation here in the first place.  To make things particularly complicated in this version of the hydrological cycle, if one dawdles a few hours along the edge of the river, one discovers that it has the disconcerting habit of flowing both down and upstream, as it interacts with the incoming and outgoing tides of the Chesapeake Bay, of which it is a tributary.  The river's source then is at times downstream as much as upstream, briny as much as fresh, the fate of all estuaries.
A river turns out not to be a piece of plumbing, a conduit for efficient delivery of a liquid, but rather a great and multifarious metabolism.  Complexity is its life, and a rough circularity is its function.  This is not to say that things don't get moved around, but they do so, at least when the river is working properly, in a manner that fits with the intricate and interwoven gestures of a master practicing Daijijuan.  Paradoxically, in a healthy ecosystem, the more abundantly its waters flow, the more complex their movement becomes: the very meandering of the river, in which it rhythmically undulates from right to left and then left to right, even as it moves downstream, is perhaps the best illustration of this point. The Choptank, then, is not a jet train powering ahead to its oceanic paradise, but rather a contemplative act focused on remaining precisely where it is, keeping itself in tune with how its manifold waters pause, even as they pass, eddy even as they stream.  Indeed the very notion that a river is not a singular but rather plural element, a gathering of the waters, hints at this.

A failure to attend to that complexity and its related aptitude for circularity has shaped all too much of the landscape surrounding where Nick and Margaret live.  For instance, if one were to look for the proverbial source of the Choptank, its starting point, one is likely to find it these days in a series of ditches draining fields of corn and soybeans.  This at least is the result that occurred when local writer Curtis Badger, in his A Natural History of Quiet Waters, attempted to trace the headwaters of the nearby Pokomoke.  From the 1700s onward, he notes, the ditch, as much as the plow and the ax, were the tools by which European settlement transformed the extensive swamps formerly characterizing this area into what locals like to say is "working" farmland.  A lot of work, indeed, does go into dewatering the land in this area.  Unlike a river, a ditch is a piece of plumbing, in which not the waters but only the water, as a singular, homogenous and troublesome element, is siphoned off and then unceremoniously disposed of.  For the digger of ditches excess water is not a precious element to be conserved but instead unwanted refuse, trash.  And "industrial-strength ditches," as Badger puts it, crisscross this landscape.  Indeed many of them have names suggesting a certain rural charm: "Bald Cypress Branch," "Coon's Foot," "Cowhouse Branch," "Gum Branch," "Gray's Prong," "Tilgham Race" are just some of these.   But Nick would remind any visitor to his property such fetching words are wasted on a form of interaction with the land that only ends up in leveling and ultimately impoverishing it.
And so we return to the dream mentioned above.  Nick and Margaret have been busy for over fifty years on a project of regenerative ecology that for the most part has involved doing precisely nothing, of letting an extensive plot of farmland literally go to seed.  This has been accomplished with attentiveness and love, rather than indifference and neglect.  And along the way, at least some explicit interventions were indeed called for.

As Nick guides me down a path running along the edge of the property, he points out the remains of a ditch, in shambles but still waterlogged, that was dug early on in the history of European settlement.   In those times, he notes, ditches were often excavated after a winter thaw.  Farmers would determine where the snowmelt was flowing, charting out the lowest contours on the land, in order to place the ditch's course along these.  Ditches constructed in this manner, at least on the Eastern Shore, have a laudable tendency to tap into the aquifer, which often is only a few feet below the surface of even the more elevated areas.  Not unsurprisingly ponds and seeps abound on this particular ditch as it caves in and dissipates from Nick's studied inattention and particularly so after he dammed up a few decades ago one section of it.  As the land in that area reverted to a bog, interesting things began to grow there of their own accord, including ground cedar, really a clubmoss, sphagnum moss, and even the occasional stand of orchids.  When all these appeared, Nick and Margaret knew their project was working as they had hoped it might.

The earlier part of our walk had angled down from the farmhouse through former cornfields toward the river.  On these uplands, where crops once grew poorly on dry, sandy soil, an entire forest has sprung up over the last fifty years with loblolly and Virginia pine, black walnut and pignut hickory, southern red and willow oaks now predominating.   Under the loblollies, pink lady slippers, which are dependent on a particular fungus associated with this tree, have appeared as if by magic.  The magic unfortunately has not kept  deer with discriminating taste buds from eagerly chowing down upon the blossoms.  To Margaret's consternation, the number of lady slippers in that area is in decline. But still, all in all, things are going reasonably well.  Amazingly, not very much management for feral trees and exotics, including Norwegian maple, crape myrtle and all the rest of their ilk, has been necessary.  Nick attributes this to the fact that land along the river, too wet for crops, was planted in trees in 1927 and then managed as a woodlot. Today, a healthy, mature beech forest sustaining a wide variety of native plants and shrubs now flourishes there. This older, mature forest in turn has served as a dependable source of seeds and spores taking root in the former cornfields upland from it.

There is no end to Nick's meditations on the intertwining of this land and its waters.  As our walk nears its goal on the banks of the Choptank, Nick points out three consecutive swales marking the course of the river in times past.  The first one we reach, he fancies, is the river a thousand years back. These depressions, meandering across the forest floor, make for difficult crossing.  Their boggy muck, glistening in the sunlight, threatens to swallow one's foot with every step.  Surrounding us are literally thousands of jack in the pulpits, a species of skunk cabbage with a fetching bloom, not to mention a scattering of spring beauties, Indian cucumber, May apples and other spring ephemerals that love moist feet.  Here and there a wood frog or bull toad hops out of the way of our passage.  Reaching the dryer area lying between two swales, Nick comments on how berms of sand built up here, as well as in tandem with the current banks of the Choptank, are the residue of yearly flooding, as the waters overrunning the river's banks are interrupted by the trees and shrubs of the forest.  This allows time for sediment captured upstream to drop out of the water and be deposited anew.

Nick takes me to the final berm near the Choptank and asks me to consider how its sands engage in ionic capture of nutrients and pollutants, leaving the waters of the river to pass downstream cleansed of excess phosphorous, as well as a host of unseemly chemicals. Listening to him, I finally begin to get a hint of the complexity and breadth of his vision.  He is asking that those who visit here join him in the contemplation of the journey and fate of each and every drop of the waters finding themselves, however temporarily, at home here.  When Tom Horton wrote that the unexamined place is not worth living in, he surely had Nick and Margaret in mind.  There is no walking this landscape in their company without every step becoming an interrogation in how the waters are making their way through it.

I ask Nick if he ever dreams of the land in his sleep, and his answer is disconcerting.  In his dream, it turns out, a phalanx of bulldozers are poised at the edge of his and Margaret's property.  The foreman of the crew shows Nick a legal document ordering the uprooting of the newly-regenerated forest to make way for a suburban development.  This nightmare lies literally in plain site during Nick's waking hours in every direction from where we stand.  "The leveling of the land," as Nick puts it, involved in suburbanization and farming, continues unabated.  Imagine, Nick asks me, to think of what a single branch fallen from a tree does to the waters encountering it on the forest floor.  The branch interrupts the waters' progress, complicates their flow.  The irregular topography of land is what makes it amenable to the diversity of life.  Farms and suburbs tend to smooth out the land and channel its waters quickly away into ditches and storm drains.  Nick's goal, on the contrary, is to keep the waters around and active as long as possible.  This is accomplished by intensifying the roughness of the terrain, by letting duff accumulate and fallen branches, not to mention entire trees uprooted, lie.  Nick intones, "When you walk down the land in spring and puddles are all around, the land is doing what it ought to do."

At least for the time being, Nick and Margaret's land is indeed doing exactly what it ought to do. 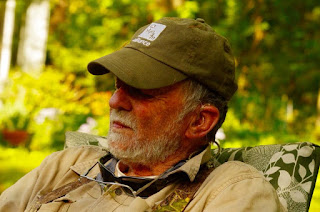